On April 8, 2019, Seiko Takase, Representative Director, and Masanori Katsura, Director, left Narita International Airport, to visit Bosnia-Herzegovia until April 15. April 10 Takase and Katsura together with Nozomi Miyanoya, lecturer at University of Sarajevo and Lamija Mršo, interpreter, visited Saburina Elementary School and gave a talk in front of senior grade students, who are very tall compared to high school students in Japan. The audience including the school principal eagerly asked questions. We brought Japanese spinning tops as gift made by a hearing-impaired Japanese person. The gifts were well received. We all prayed for peace by ringing the Peace Bell. 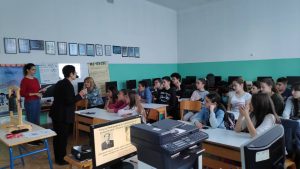 April 11 We visited the War Childhood Museum, where we learned the hardships that children experienced and how they felt during the war. Our heart hurt very much. The fact that there exists such a museum that conveys to younger generations the horrors of war is very important. 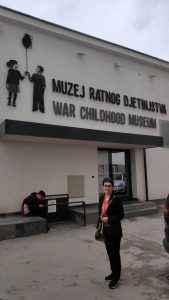 April 12 Presentation Ceremony of Peace Bell  We visited City Hall and greeted Deputy Mayor of Sarajevo Milan Trivić and Ambassador Hideyuki Sakamoto. Then we were interviewed by media. The presentation ceremony of the peace bell took place at 1 pm in a very nice room of the City Hall. Attendees were about 30 people from Sarajevo City including Vice Mayor and Parliamentary Chair. Seiko Takase explained the purpose of the gift and Chiyoji Nakagawa’s aspiration about the Peace Bell. Ambasador Hideyuki Sakamoto gave a greeting address. Deputy Mayor of Sarajevo Milan Trivić expressed words of thanks. Then Deputy Mayor rang the Peace Bell, followed by Ambassador Sakamoto and rest of the attendees. The sound of the Peace Bell echoed throughout the hall. Everyone donated coins. Deputy Mayor gave us commemorative medal of Sarayjevo as a remembrance of the occasion. Nozomi Miyanoya, Lecturer, Japanese Language Course, University of Sarajevo, was instrumental for our visit and invited us to give a talk for her students in the evening. The students understood speech in Japanese. They raised many questions and the interraction was very enjoyable. Miyanoya-sensei kindly offered to translate the book “The Story of the UN Peace Bell” into Bosanski jezik.