Talk at Peace Gathering with Hibakusha

On October 13, 2019, we had an opportunity to talk at a peace gathering held at Ookurigawa Karugamo Hall of Community Center in Tama City. It was right after the 19th typhoon hit the area and people were busy with the aftermath, but there were over 30 attendees including Mayor Hiroyuki Abe. The meeting began with a strong message about peace by Mayor Abe. A woman, who is a Hibakusha, followed. She is over 80 years old and talked about her experiences. Children, under the program of Tama City to send young generations to the cities where A-bombs were dropped, reported on their trip. Then Seiko Takase, Representative Director, Association for the Preservation of the UN Peace Bell, talked about the origin of the Peace Bell. She mentioned the fact that a handful soil from Hiroshima and Nagasaki each was buried under the foundation of the UN Peace Bell site. 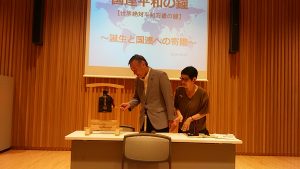