Total 44 people from Tokyo, Osaka and Uwajima attended the ceremony under fine weather as I sweat.

Two groups of Suita Child Ambassadors from the Education Association for Next Generation Children and a parents and a child from Ukurainewho came to Japan as refugee participated in the ceremony.

All the people present rang the Peace Bell. The sound of bell was sent to the world as prayer for peace.

Handmade books with a theme on peace were displayed on site and interested audience had a look at them with admiration.

Although the ceremony was held under the prevention measures to COVID-19 pandemic,thanks to the fine weather, the ceremony certainly helped us to step forward with hope for the future.

After Mitsuo Tomari, our director, gave closing remarks, a group photo was taken and the ceremony was ended smoothly. 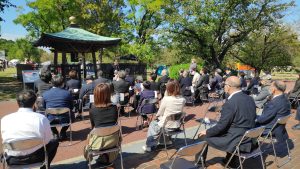 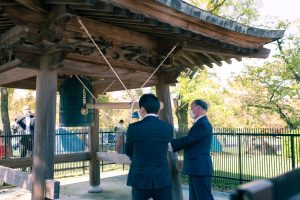 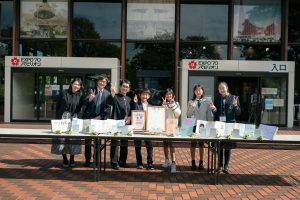