On September 21, 2022, the bell at Taiheiji temple was rang. Taiheiji is the place where Chiyoji Nakagawa  started his endeavour for peace; Chiyoji Nakagawa visited the temple when he returned home after the war, and was surprised to see that the temple bell was delivered to the government and gone.Then, Chiyoji had a bell cast using the coins collected from 26 nations and his own saber too.

The bell was marked with letters “世界絶対平和万歳,” meaning “absolutely peaceful world forever,” and was donated to the temple.

Takanobu Hoshino, chief priest, helped us with the ceremony. Jiro Ohno, our director, and kindergarten children from Rissho Hoikuen,  participated in the ceremony. The chief priest gave a speech about the bell, followed by bell ringing.

The lovely children listened to the speech delivered by the chief priest eagerly. There was an interview by Nankai Broadcasting also. 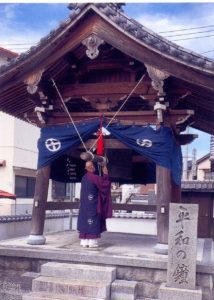 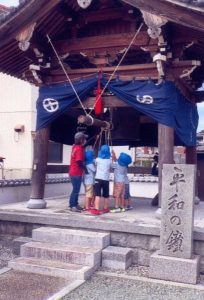 The bell in Osaka Expo Memorial Park, which is a sister bell of the one in the United Nations headquarters, was cleansied and bell ringing took place.The park was supposedly closed, Junichi Nozoe,the general manager of the park, and his staff kindly supported for us to cleanse the bell; Masaaki Taniyama,our director, and volunteers worked together. After the bell cleansing was finished, everyone on the site rang the bell and wished for peace.  We hoped that the sound of the bell reached to people in the disputed area. 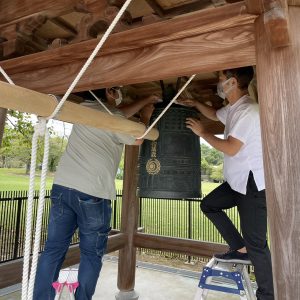 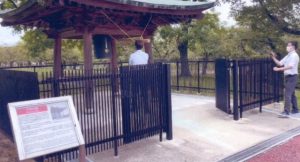 In Tokyo, there was a ceremony titled Bell Ringing Ceremony to Pray for Peace throughout Japan at  Meiji Shrine.Seiko Takase, representative director, and Masanori Katsura, our director, attended the ceremony.Following Sukehiro Hasegawa, master of the ceremony, Seiko Takase talked about the story of peace bell.Yuriko Koike, Governer of Tokyo, and other guests gave a speech and rang the bell, a scaled-down one, weighing 4kg, of the UN Peace Bell. With the performance of biwa by Kakushin Tomoyoshi, the ceremony was closed. 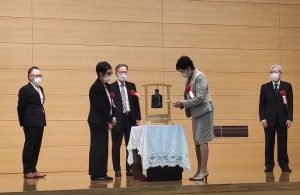