On October 24, 2021, under a clear autumn sky, the 5th Bell Ringing
Ceremony for the Peace Bell was held at Osaka Expo Memorial Park.

This year, many children from Suita Children’s Ambassadors and
Children’s Education Association and their mothers and spouses
participated in the ceremony, which was solemn yet homey.
All the participants rang the Peace Bell in prayer for peace, and the
wonderful sound of the bell echoed through the park.
In the park, picnicking parents and children listened to the sound of
the bells, and children ran around happily.
We truly felt the “peace”.

The bells at Osaka Expo Memorial Park are sister bells that contain
the same coins and medals as the “Peace Bell” that Chiyoji Nakagawa
presented to the United Nations 67 years ago.
At the 1970 Osaka Expo, Chiyoji brought the UN Peace Bell back
home to be rung by people all over the world.
At the same time, Chiyoji also built and sent to the United Nations a
replacement bell to keep the bell, a symbol of peace, alive during the
Expo.
After the Expo, the two bells were exchanged and the replacement Bell
was presented to the Osaka Expo Memorial Park.
Fifty years later, the UN Peace Bell in New York and the Peace Bell in
Osaka Expo Park continue to appeal for world peace in their respective
locations. 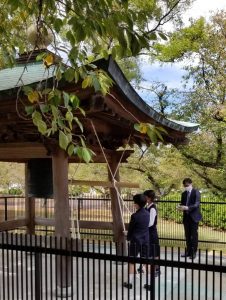 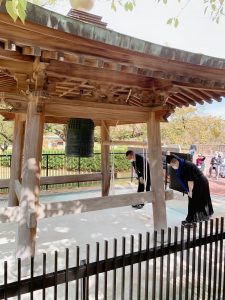 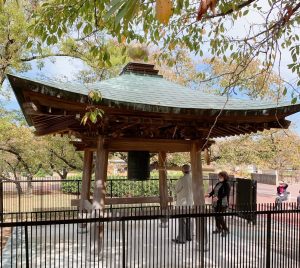 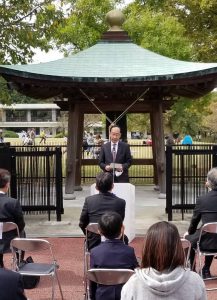