On September 21, 2022, the bell at Taiheiji temple was rang. Taiheiji is the place where Chiyoji Nakagawa  sta […]

On September 16, the International Day of Peace ceremony was held at UN Headquarters, and Director Tomari and […]

On August 25, 2022, Director Takai and I visited Hiroshima City and presented the sister bell of the United Na […]

On September 21, 2020, the 4th ringing ceremony of Peace Bell was held in the Osaka EXPO Memorial Park under t […]

The first UN Peace Bell Concert started in Nihombashi On November 16, 2019, a music concert for peace was held […]

On September 20, 2019, people with flags of nations in hands gathered in the Japanese Garden of the United Nat […] 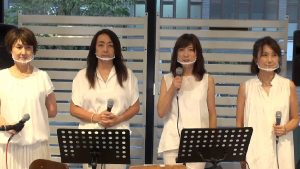 ※Attention
"The Association for the Preservation of the UN Peace Bell" is an organization different from the World Peace Bell.